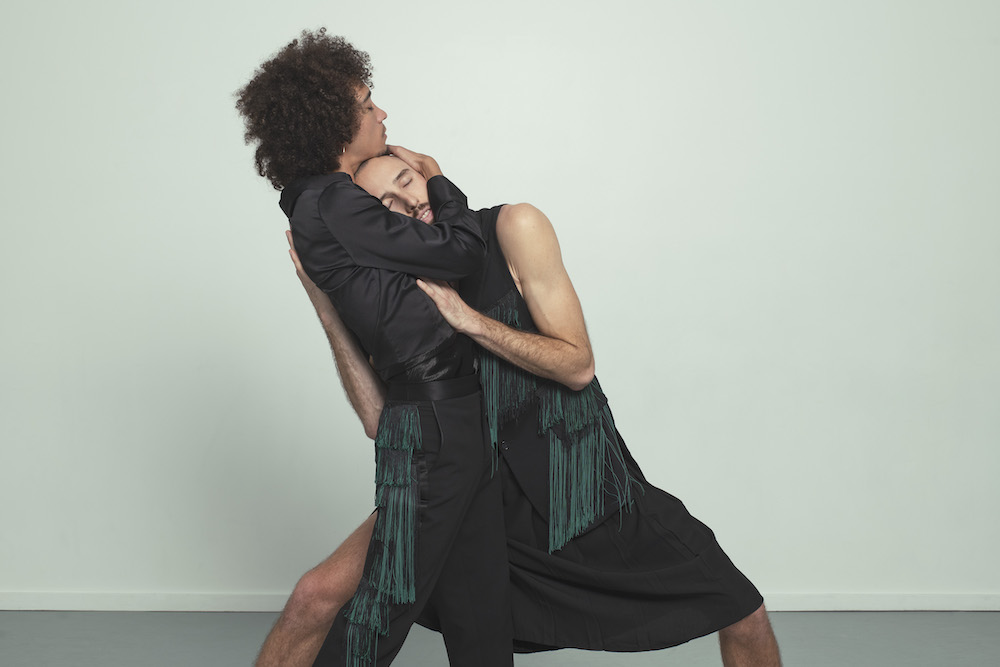 UNA's mission is to discover and communicate deeply rooted embodiments of human existence through physically powerful dancing and imagery that are evocative and colorful. UNA celebrates individuality and is dedicated to bringing vibrancy and joy to the world.​

Raised in San Francisco CA (the stolen lands of the Ramaytush and Ohlone peoples), Chuck Wilt is the Artistic Director of UNA. In 2013, Chuck founded bi-coastal dance company UNA Productions, working in San Francisco and NYC. UNA has been presented by the Chutzpah! Festival in Vancouver, Sointula and Alert Bay-performing and engaging in cultural exchange with the ‘Namgis First Nation Community, presented by Fusion International Japan in Kaga and Tokyo, co-presented by the ODC Theater, presented by the Spectrum Dance Festival, Movement Research at the Judson Church, 92nd St. Y, Jacob's Pillow Inside/Out, Springboard Danse Montreal, Dumbo Dance Festival, Tisch Summer Dance Festival, CPR and more. This year, UNA was co-commissioned by The Clarice-Smith Performing Arts Center for the world premiere of Grass is Green, Chuck will create work for KSU as a Choreographic Fellow, and Berkeley Ballet Theater/Post Ballet with the Kronos Quartet, and UNA received support from US Artists International to tour new work to Jerusalem.

Chuck has been an Artist in Residence of Berkeley Ballet Theater, Fusion International (Japan), Brooklyn College/CUNY Dance Initiative, The Launchpad/Dance Initiative (CO), 92nd St. Y, and a choreographic fellow for the Alvin Ailey Dance Foundation NDCL. They were also a recipient of the Rainin Opportunity Fund and a USAI grant from the MidAtlantic Foundation.

He has been on faculty for Tisch Summer High School Program, the Lines Ballet Training and Summer Programs and has taught internationally. Chuck graduated from NYU Tisch, has performed for and assisted international choreographers, and is also a Gyrotonic teacher. They are second generation Queer and a proud pup parent.

Chuck Wilt was a Springboard Emerging Choreographer in 2016. 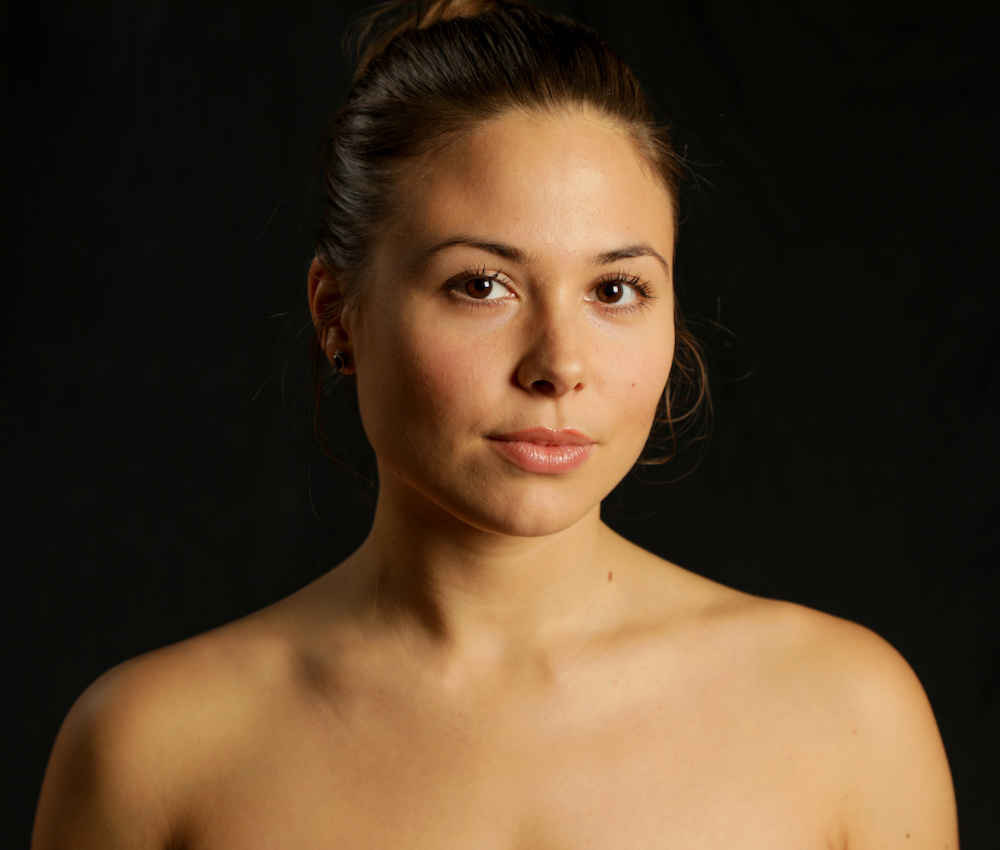 Artist, performer and choreographer based in Canada, known for her radical works at the edge of dance and performance. At the young age of 26, she had already won two awards for her choreographies. She was a double prizewinner at the Prix de la danse de Montréal, winning both the Prix du CALQ for Best Choreography of 2015-2016 for her choreographic installation When the Ice Melts, Will We Drink the Water?, and the Prix Découverte de la danse, presented by Agora de la danse and Tangente, for Unrelated (her first choreography). Also Daina was named by the prestigious German TANZ magazine as one of 30 promising artists for the year 2017 and named one of 25 to watch by the American publication, DANCE in 2018. In 2019, she won a New York Dance and Performance Award, Bessie, for Outstanding Choreographer.

Recognized as one of the most promising young choreographers of the next generation, since 2015 her work has been presented over one-hundred times in 15 countries and over 31 different cities. Her work being presented in some of the most prestigious festivals (The Venice Biennale, Oktoberdans, MONTPELLIER DANSE, and the Munich Dance Biennale) and on the stages of the world (Canada, France, Spain, Belgium, Norway, Finland, Greenland, Germany, Italy, Switzerland, and Mexico).

Daina is the artist-in-residence at Agora de la danse in Montreal until 2023. In 2018 she returned to the Venice Biennale to teach at the Biennale College, whilst creating a group-piece for 15 students. She continued to tour in Norway, Belgium, Italy, Czech Republic and Canada. In 2019 she toured Europe, Canada and the United States, meanwhile creating a new group piece (J’ai pleuré avec les chiens) and a solo (Laborious Song). In 2021 Daina looks forward to presenting 5 of her works at Montpellier Dance Festival, her retrospective in Montréal, at Usine C, continuing to tour all of her works and finally premiering J’ai pleuré aves les chiens (Time, Création, Destruction), her first original group piece. 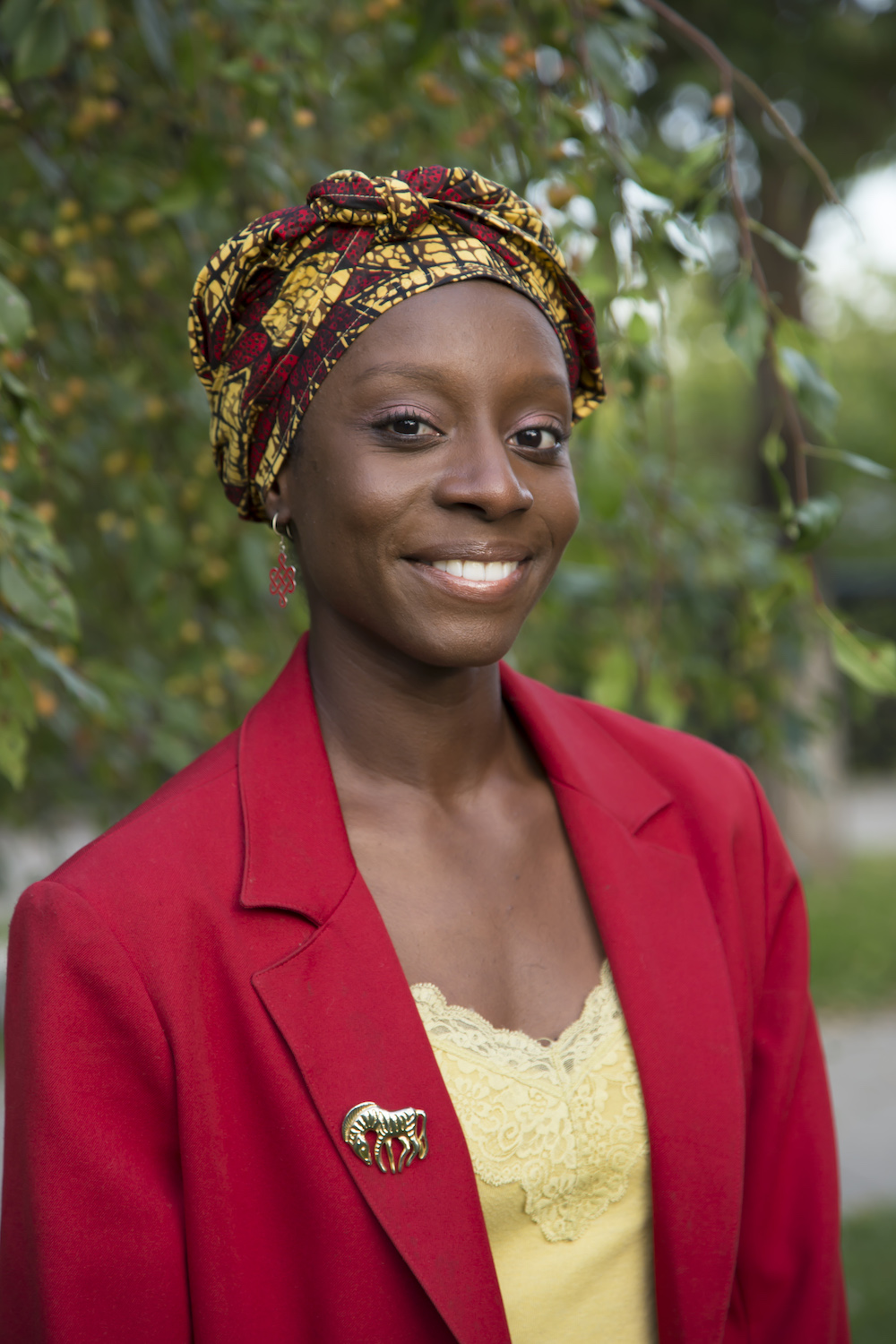 Brooklyn native and Saint Paul-based artist excavating cultural retention and fragmentation within their Caribbean diasporic identity. Morris (formerly Morris-Van Tassel) was a performer with TU Dance from 2007-2017, featured in works by Kyle Abraham, Gioconda Barbuto, Camille A. Brown, Ronald K. Brown, Greggory Dolbashian, Katrin Hall, Francesca Harper, Dwight Rhoden, and Uri Sands. In 2020 she served as the company’s Artistic Associate and is a founding Teaching Artist at The School at TU Dance Center since 2011. In 2018 they were named Dance Magazine’s “25 to Watch!” and is currently an Artistic Advisor to Springboard Danse Montreal. Morris-Van Tassel was named Minneapolis’ City Pages Artist of the Year in 2019 and Best Choreographer for their solo, “Yam, Potatoe an Fish!” Alanna is the Artistic Director of AMVTP, founded in 2017 to produce dance, education and community-building initiatives. She is a 2015 McKnight Dance Fellow, a graduate of The Juilliard School and LaGuardia High School for Music & Art and the Performing Arts. Morris’ choreography has been commissioned by Minnesota Dance Theatre, Penumbra Theatre, Children’s Theatre Co.; and the Dance Department at Carleton College. They are currently developing a collaborative solo performance art project, Black Light_mysteries and manifestations of the creative life force, which explores the nobility of black-ness, the divinity of the feminine energy, and the harnessing of sensual expression. Its second iteration is being presented by The Great Northern Festival, The Cowles Center for Dance and Northrop in February 2022. 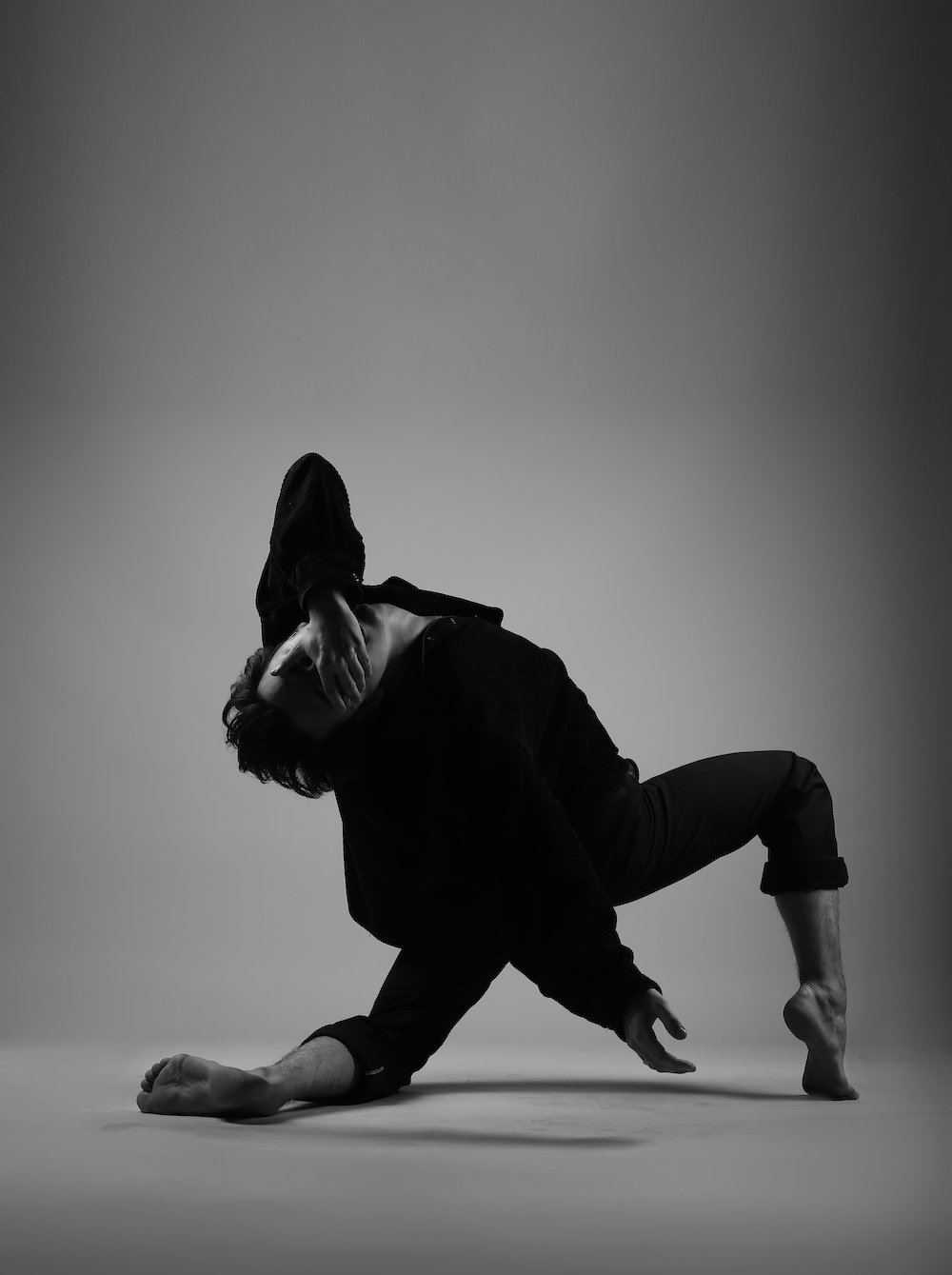 “Conceptually I want to derive inspiration from references through film and politics. These references will be macro and micro scale ironies that exist in our current world and also the realities we create. I want to use cultural and fictional ideas of irony that support movement creation and imagery to facilitate an atmosphere/ world that feels understandable by the audience.”

Ethan Colangelo was born and raised in Toronto, Canada where he began his initial training at Canada’s National Ballet School and Elite Danceworx. He is now an alumni of the Juilliard School where he received the Hector Zaraspe Prize for Choreographic Promise. As a choreographer he has presented work at the Baryshnikov Arts Center, Festival des Arts de Saint-Sauveur, Juilliard’s Choreographic Honours Showcases, APAP 2018, Alice Tully Hall in Lincoln Center and the Brooklyn Academy of Music. Colangelo was also one of nine choreographers selected internationally for the Copenhagen International Choreography Competition in 2018 and 2021. At the competition in 2021 his piece “recurrence” won the audience choice award along with the DAF production prize and a residency with Hessisches Staatsballett. Most recently he has created new works for Ballet BC, BODYTRAFFIC, Whim W’Him Contemporary Dance, Arts Umbrella Dance Company and MOVE NYC. He is looking forward to new creations with the National Ballet of Canada, Arts Umbrella and DAF in Rome this spring. 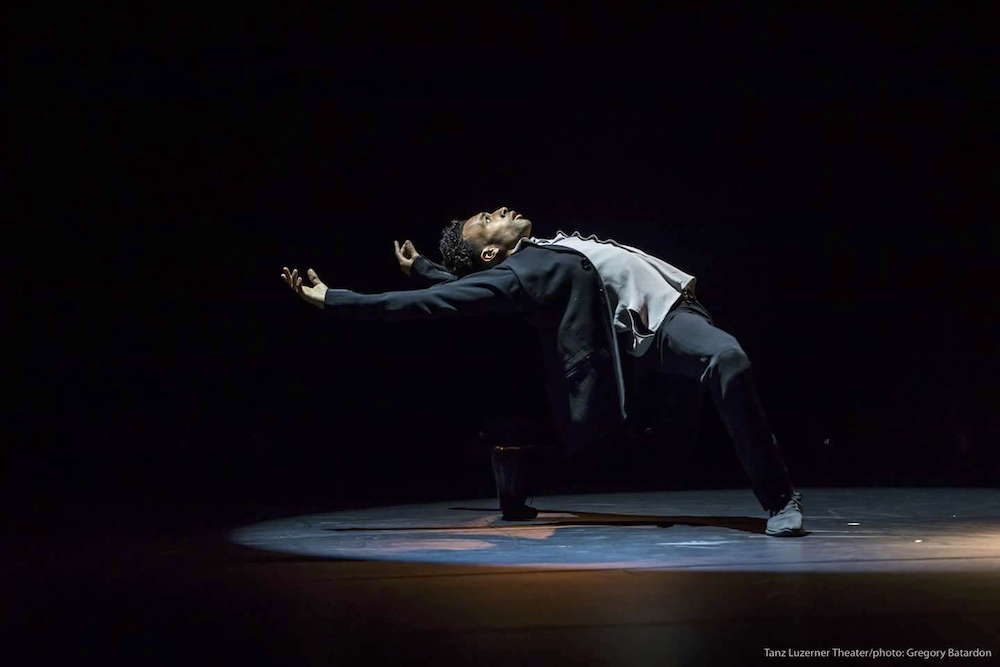 “I seek to capture the playfulness, humility, and vulnerability of the human spirit in my work. The continual trial and error of ideas give a chance to the unexpected. It’s a game, and that’s the fascinating part, that moment of the least expected that raises the hair on my flesh. I appreciate the simplicity and a clear intention behind each movement and the scene, leading to a natural and clever design of the space.”

Carlos Kerr Jr. is a Belizean-American dancer from Brooklyn, New York. He attended Fiorello H. LaGuardia High School of Music and Art and Performing Arts and then continued his training at the Ailey Fordham BFA program at Lincoln Center, where he graduated with honors. Carlos is a 2010 recipient of the Glory Kaufman Award for Excellence in Dance. He has worked internationally, dancing with the Alvin Ailey American Dance Theater, the Metropolitan Opera Ballet, Rubberband Dance Group, Kibbutz Contemporary Dance Company, and Stadtheater Ulm. Carlos has been a soloist member with the Tanz Luzerner Theater in Switzerland from 2016 until 2022. He has performed in repertoire and original creations throughout his career with notable choreographers, including Crystal Pite, William Forsythe, Hofesh Shecter, Johan Inger, Bryan Arias, Inbal Pinto, Fernando Melo & Marcos Morau. In addition to his career as a dancer, Carlos is also a choreographer, filmmaker, and dance teacher. Most recently, his work ‘Remotely Equal’ was selected and recognized in the Concours Choreographique of Mandalain Ballet Biarritz. In addition, his creation “Never Odd or Even” was featured as part of an evening of work alongside Patrick Delcroix for the Tanz Luzerner Theater. 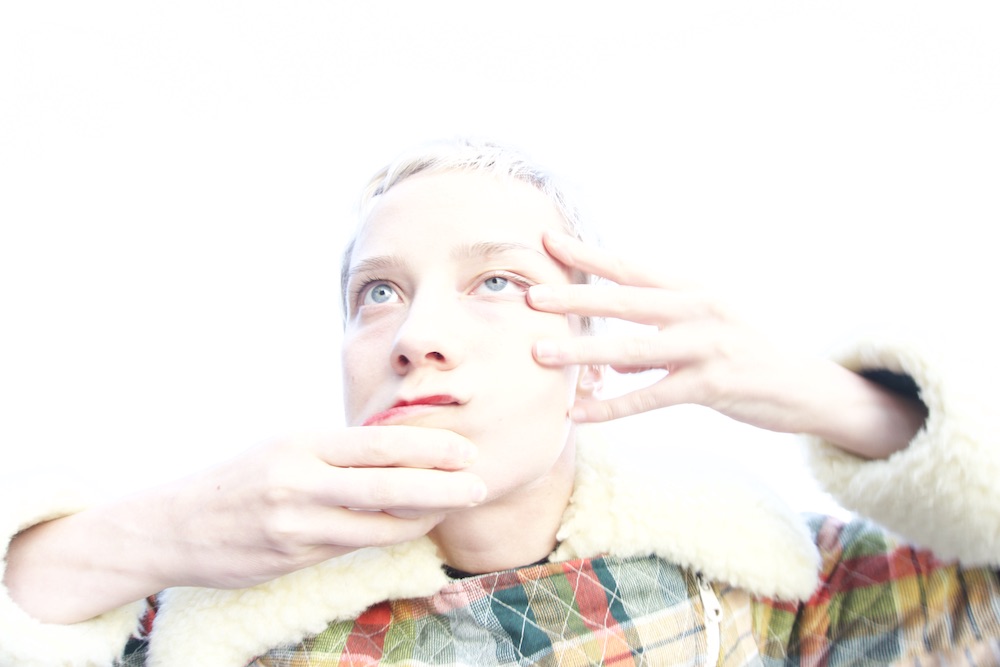 “I’m fascinated by things I don’t understand, the ineffable, the uncanny. Through my art, I explore my potential to create connections with the world around me. I am interested in how multilayered invisible landscapes can be visible through choreography.”

Annamari Keskinen is a dancer and choreographer from Helsinki. For the past 18 years, she has worked internationally in dance companies and as a freelance dancer with over 30 different choreographers and directors. Alongside her dancing career, Annamari has developed her choreographic practice. Her first full-length work, ‘Ikimono,’ was seen at the Staatstheater Kassel in Germany in a two-part evening ’emoji’ season 2016/2017. Annamari has taught professional and semi-professional dancers in Staatstheater Kassel, b12 festival, Salzburg Experimental Academy Of Dance (SEAD), Tanssille ry, Finnish National Opera Ballet School, Dock 11, Diversions (National Dance Company of Wales), Iwanson and Unite Dance Camp India among others. In 2018 Annamari founded dance theater company Thar Be Dragons together with dancer and choreographer Ryan Mason. Thar be Dragons functions as a platform for both choreographers to create and present their collaborative and personal work. The company has since produced four full evening works ‘Dying Animal Don’t Feel Sorry For Themselves’ (2018), ‘EI’ (commission Staatstheater Kassel 2018), ‘Eternal Return’ ( JoJo Oulu Dance Centre 2021) and ‘BLINK’ (commission Staatstheater Braunschweig 2022). 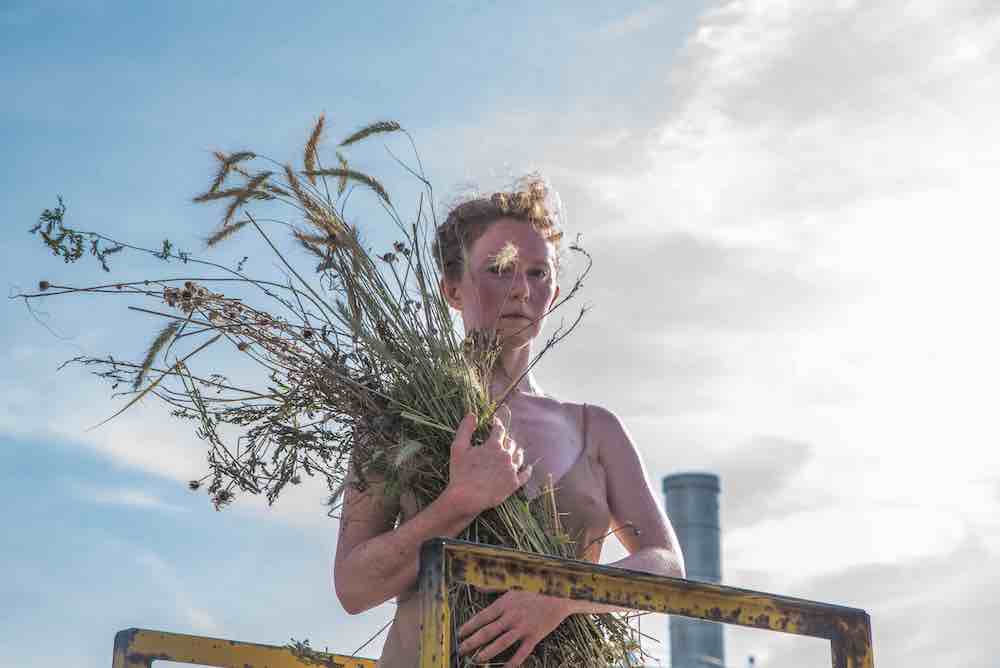 Kelly Ashton Todd is a performing artist, environmental activist, and filmmaker. She holds a Master’s in Sustainability Leadership from Arizona State University and currently performs with Sleep No More, NYC. Her award winning environmental dance film series, Under Review, has attended over 20 film festivals nationally and internationally.

“Through years of performing and creating in physical theatre, my work develops the organic connection between inner life, the tension we hold, the micro aggressions of our climate, creative imagination and the expressive body. With rigorous practice I explore: archetypes, character and scenic atmospheres, immersive and site-specific partnering, and qualities of movement. I grapple with giving voice to voiceless lands in a new language that inspires audiences to act amidst in a way that protects the wilderness. By creating new, innovative pathways for individuals to engage with our environment, we can spark the important political change needed to protect these irreplaceable, beautiful and truly wild lands. Using choreography, we explore pressing issues around how the deterioration of our wilderness will create a domino effect on the landscape, wildlife and society. By merging what we as a culture find beautiful – human skill, the physical body, and epic landforms – we dig into the fundamental core of a viewer’s emotions. The result of this artistic process is to ignite action – encouraging viewers to vote, behave, and respond in an informed way that allows our planet to heal.”